5 Months Until Windows 7 is End of Life.

After Ten Years Windows 7 will no longer receive support from Microsoft.

Windows 7 is considered one of the best operating systems and is still used by many professionals in the workplace. Windows 7 replaced the popular Windows XP back in October 2009, it was a new and improved version of XP and added many new features. Now the road has come to the end for Windows 7 and its time for Windows 10 to show what it can really do.

Windows 10 was first released back in July 2015 as the next version of Microsoft’s flagship operating system, four years on and Microsoft has announced that Windows 7 will be end of life by the 14th January 2020, Microsoft is offering an easier way to upgrade as is not wanting a repeat of the issues it had when XP went end of life, leaving many computers vulnerable to attacks.

Well, unfortunately, we have seen a return of this popup, but now it’s informing that Windows 7 is nearing the end, but why should you take note, and move to Windows 10? 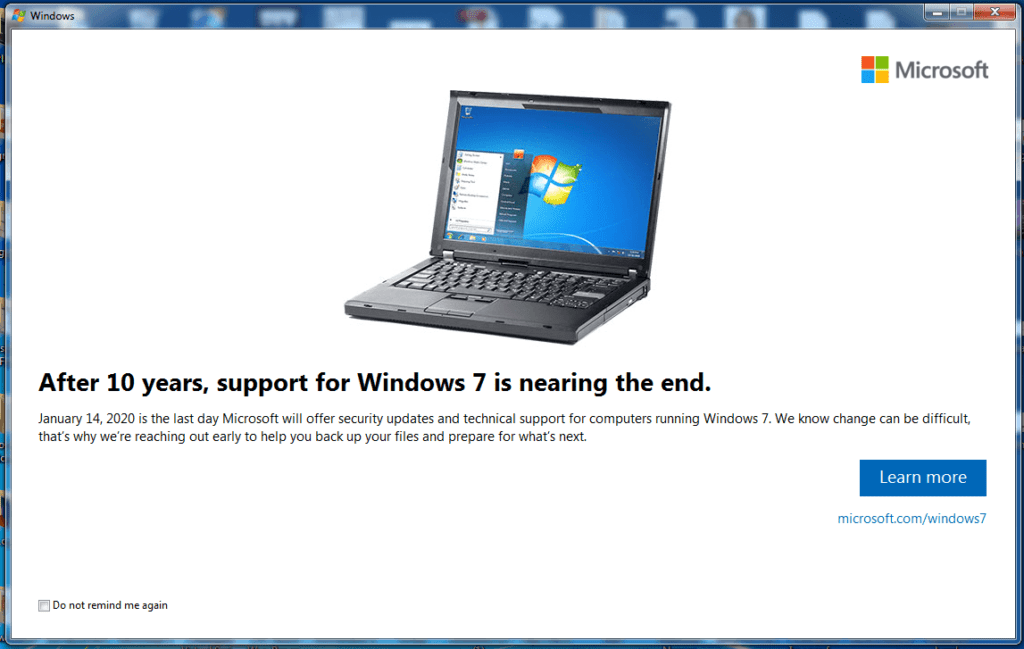 When an Operating system goes end of life, it means it will no longer receive security patches, which leaves the system open to vulnerability.
in October 2017 the NHS was hit with a ransomware attack known as WannaCry. this Ransomware attack exploited a protocol found in windows XP, via the internet application. It infected 230,000 computers worldwide and cost the NHS 92 Million in cancelled appointments. According to Netmarkshare.com, 36.05% of devices are using Windows 7 & 2.68% are Windows XP accessing the internet (as of 07/08/19 11:07). This will lead to hackers looking for ways to exploit Windows 7 to find vulnerabilities to gain ways to disrupt day to day business as seen with the with WannaCry outbreak.

How Windows 10 has come a long way

When windows 10 -1507 released, it wasn’t well-received as it had features that pushed the boundaries of what an Operating system should be, such as Microsoft Assistant Cortana, was enabled and the user wasn’t able to turn it off, Microsoft also targeted advertisements based on the end user behaviour, and Microsoft also collected data about its users without telling them.

Simple features such as Search ability which was part of Windows 7, was not up to the standards that we were used to.

Well, the Good news is Microsoft Listened to the community about these issues and has since done 7 feature updates over the last four years addressing these concerns, giving the user more access to control Windows 10 and how it works for them. The latest feature update was Windows 10 – 1903, has introduced a cleaner and controlled environment for the end-user. 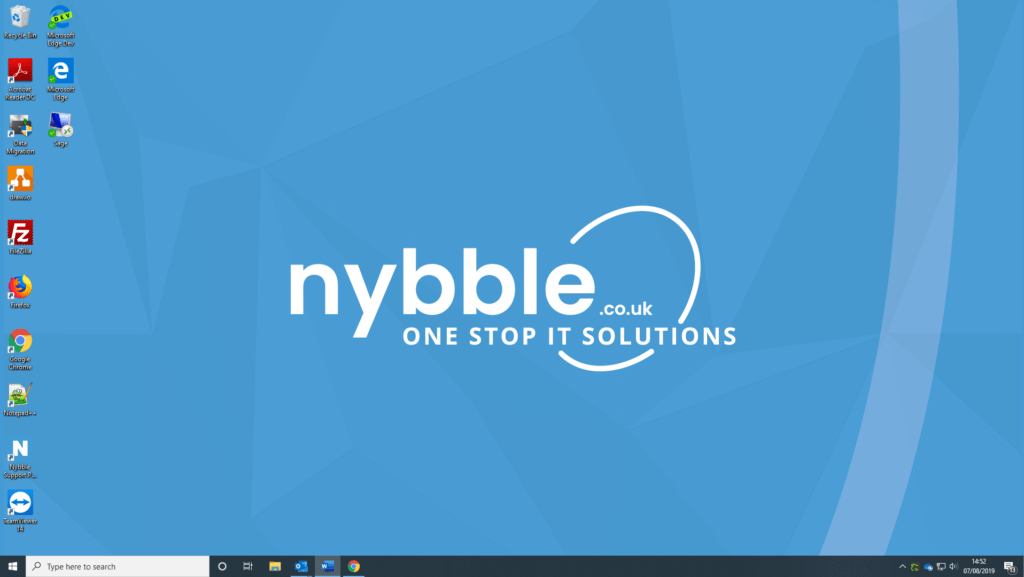 Some new features were introduced in the last Windows 10 update, the ability to mass unpin applications from the Start menu. Users can now remove more of the inbuilt applications such as Calculator,3DViwer, Office built-in application and Windows default mail application.
Unfortunately, you still aren’t able to remove the built-in browser Edge but Microsoft announced they were redesigning the browser using google chromium OS, this version of Edge its currently in early access. 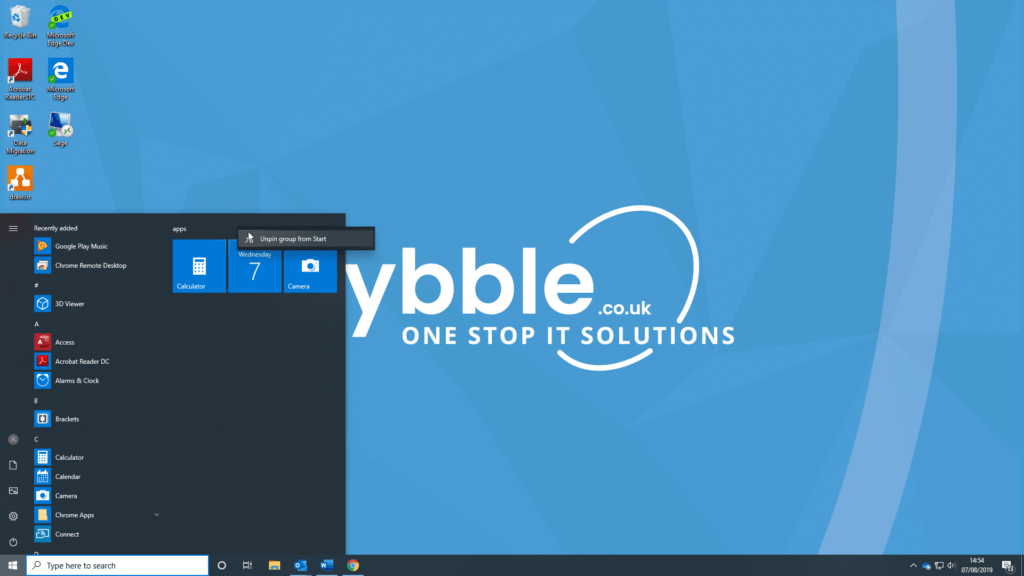 Another new addition for Windows 10 is the Light theme which has been added to the Themes collection, you can now choose between
the default Windows 10 theme, the Dark theme and the light theme. All these themes change all aspects of the Windows experience including the Start menu & notifications. 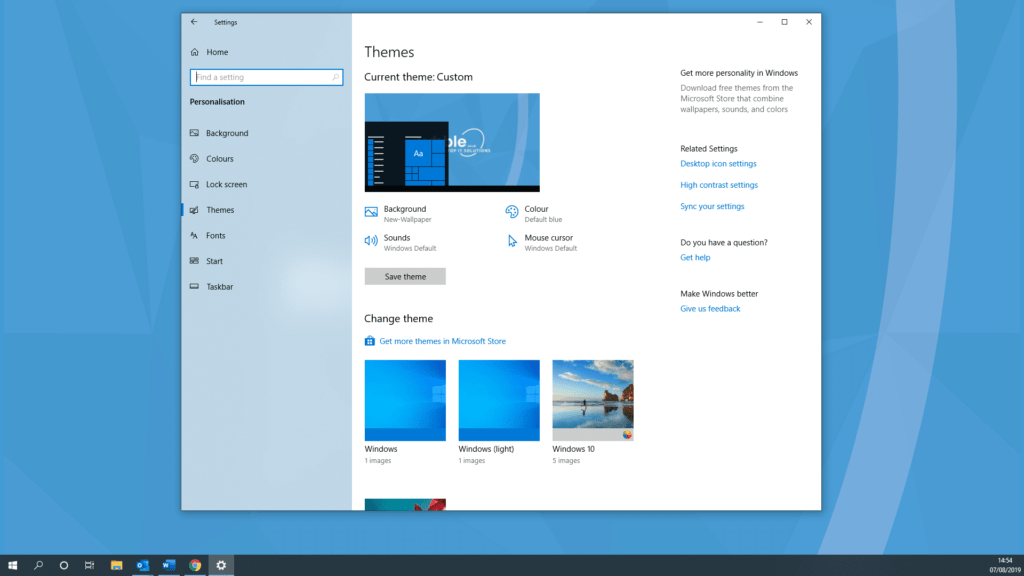 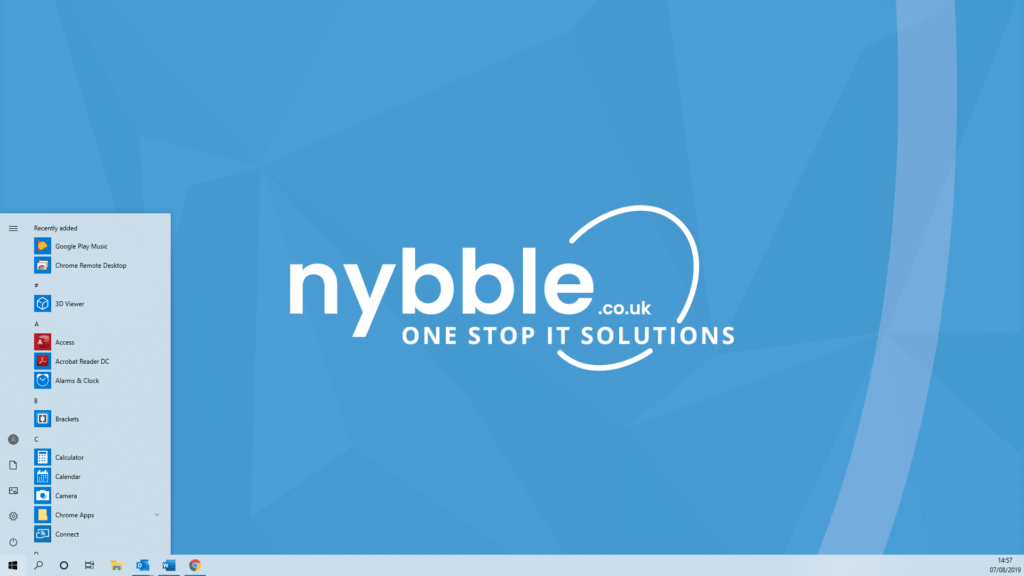 Other improvements have been made around how Windows operates with the CPU since the spectre leak was discovered last year Microsoft has been working to improve how it’s software works with modern processors, 1903 addressing these issues and improving performance.

1903 also helps with windows updates, it now allocates 7GB worth of storage, which will be reserved for Updates, Windows now gives you more control over updates, it will now ask you when you want to apply updates, so it doesn’t stop you working.

You can pause updates for up to seven days, this was introduced in 1803/1809 you can set active hours to apply these updates. 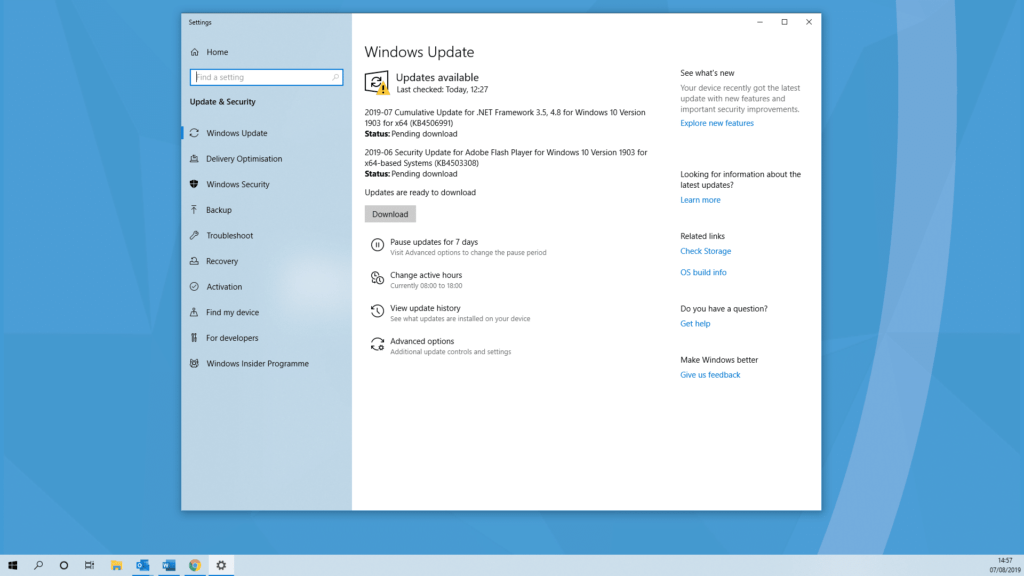 Windows sandbox (only Available on Professional and Enterprise) is a feature that allows a Virtual Windows 10 environment to be started, this will give sysadmin the ability to test updates and features before rolling them out live. Other features introduced in earlier updates included My People (Windows 10 Fall update 2017), this application allows you to pin contacts in an easy to find icon on the taskbar. Timeline (Windows 10 Spring update 2018), gives you the ability to switch between applications and create a new Desktop.

The 1903 update made changes to the Search Bar, it has now separated Cortana from the search bar and improved its ability to search, you can now search between, Web, Apps, Document and Settings, and it also shows recent activities.

Upgrading from Windows 7 to Windows 10

When we talk to people about moving from Windows 7 to Windows 10, people always ask us how much will it cost?
Each case is different, depending on certain factors, for example,

Will my Core business applications work with Windows 10?

– We would suggest speaking to the developer or software provider to see if it’s compatible, but be aware they may charge for upgrading you to the newest version which might require newer hardware such as Servers and Storage.

Will I need to buy new hardware?

– in some cases no, this depends on if you meet the requirements for Windows 10 upgrade, if you do you will have to buy a new OME Licence from a Microsoft Partner, Nybble can provide these for you. Windows 10 Pro is £219.99 Inc Vat, Windows 10 Home is £119.99 Inc Vat.
If you do upgrade your older hardware, we strongly recommend upgrading your old Hard drive to a new solid state drive (SSD) as Windows 10 runs better and faster on SSD’s. If you decided that it’s time to change your hardware you have a couple of options, you can buy new hardware that will come with Windows 10 compatible hardware out of the box, or you can buy Refurbished Hardware.
Nybble.co.uk are Dell and HP partners and can offer great deals on new hardware which come with 1-3 years manufacturer warranty.
Nybble.co.uk also offers a wide variety of Refurbished Hardware, that comes with the latest Windows 10 1903 update. All our machines come with a minimum 12 months warranty and can be extended up 3 years. We offer Budget, Mid-range and High Range including desktops and laptops. All our machines are sold with Solid-state drives. You can subscribe to our newsletter, for our latest offers.
If you would like to speak to us about how Nybble can help you move from Windows 7 to Windows 10 Pro, please give us a call on 0330 0020886 or Email us at info@nybble.co.uk

Download our remote IT Support tool for Windows OS.

Download our remote IT Support tool for Mac OS.

Send us a message and will get back to you asap.